Earlier this month, LiteSpeed Technologies released LSWS 5.0 – the latest version of their Enterprise Web Server, the technology that powers the ProperHost Magento optimized hosting platform. This release is a particularly exciting one because it brings some revolutionary new features that mark the beginning of a new era in web server technology and high-performance hosting.

Most importantly to all Magento store owners is the addition of LiteMage Cache, a brand new extension that enables full page caching directly in the web server using ESI hole punching. Magento has a reputation for being slow due to its complex architecture and one of the ways to increase speed is by introducing one or several caching mechanisms. However, since certain areas of a Magento site needs to be dynamically updated for each user, such as items in the shopping cart or the “My Account” logged-in page, traditional caches cannot efficiently cache most Magento pages. 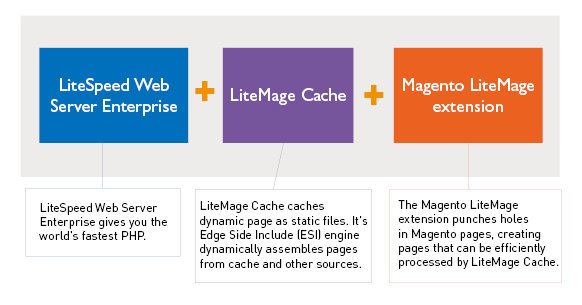 LiteMage Cache uses Edge Side Includes (ESI) to punch holes in pages where information changes from visitor to visitor. The remaining content is saved to cache. When the next person visits the same page, the cached content is served quickly, with only the holes needing to be filled in with data for that visitor. LiteMage Cache also caches per-user data in private caches, so entire pages, even those with multiple holes, can be assembled completely from cache.

The world's most powerful Magento cache

This makes LiteSpeed + LiteMage Cache the fastest and most powerful web server and caching solution for high-performance Magento hosting. Benchmarks have shown that LiteMage Cache can increase speed by as much as 20 times compared to NGINX and Varnish-based solutions, which are also much more complicated to set up and not suited for shared hosting environments.

Furthermore, LSWS 5.0 brings support for HTTP/2, claiming to be the first widely-used web server to support this important upgrade to the Internet’s fundamental protocol. HTTP/2 contains a number of advantages in terms of performance and security:

Additionally, LSWS 5.0 includes improved support for WebSocket real-time server/client communication and a number of other improvements and fixes.

We are excited to announce that ProperHost will soon offer LSWS 5.0 with LiteMage Cache on our Magento optimized hosting plans so our clients can take advantage of this great new technology!

If you have forgotten your password, you can reset it here. When you fill in your registered email address you will be sent instructions on how to reset your password.